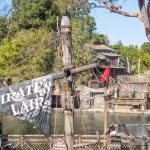 Disneyland’s Tom Sawyer’s Island has always been a destination for those who enjoy more physical adventures inside the park. With the success of Disney’s “Pirates of the Caribbean” franchise, the company decided to extend the pirate theme outside its namesake dark ride and across Rivers of America. Zeitgeist Executive Creative Director Chris Runco served as the co-concept and co-show designer for the fun and interactive pirate themed experiences that pepper the island to this day!